Cars 2 Toys and Games: Something for every McQueen and Mater Fan

Cars 2 has finally hit movie theater and despite mixed reviews, one thing is for sure- kids cannot get enough of the lovable cars characters. Cars fans both new and old are going to love some of the great toys and games that our out this year. From new diecast cars to playsets and video games- there will not doubt be something for every Cars fan.

In this game cars fans can race around the world fine tuning their spy skills. This video game is available on all major gaming platforms. 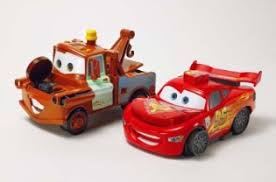 Kids will have lots of poppin’ fun with these interactive electronic games shaped just like Lightning McQueen and Mater. Each game features four interactive parts that literally pop out of place. Listen to Lightning and Mater tell you which parts to twist or push back into place before time runs out. Game difficulty increases as you advance levels. Perfect for summer play, kids can give Team 95 a helping hand! With the quick fill water tank and super soaking power, Lightening Mcqueen will be back on the track in no time! Great for pre-schoolers- Just shake ’em up to hear their engines rev. Then, let ’em go and watch ’em race! It’s a head-to-head race of speed and fun all the way to the finish line, just like in the Disney/Pixar Cars 2 movie. There’s a huge variety of these playsets out. Cars fans can build the Grand Prix Rivalry Set with Bernoulli and McQueen, Tokyo Pit Stop set with Luigi and the pit crew team, The Spy Jet Escape (pictured) and more!


What do you think about Cars 2 Toys and Games: Something for every McQueen and Mater Fan?

7 Responses to “Cars 2 Toys and Games: Something for every McQueen and Mater Fan”